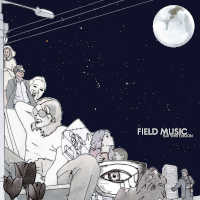 “We want to make people feel good about things that we feel terrible about.” says David Brewis, who has co-led the band Field Music with his brother Peter since 2004. It’s a statement which seems particularly fitting to their latest album, Flat White Moon. Sporadic sessions for the album began in late 2019 at the pair’s studio in Sunderland, slotted between rehearsals and touring. The initial recordings pushed a looser performance aspect to the fore, inspired by some of their very first musical loves; Free, Fleetwood Mac, Led Zeppelin and The Beatles; old tapes and LPs pilfered from their parents’ shelves. But a balance between performance and construction has always been an essential part of Field Music.

Note: The LP is available on indie-shops exclusive white vinyl.

We’re offering Flat White Moon at special pre-sale prices, which won’t be available after release. Click here for more details and to order your copy.