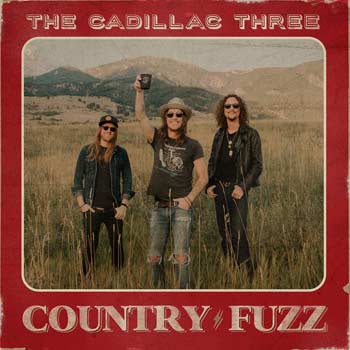 Leaving a lasting impression on fans across the globe with their instinctive sonic tendencies, The Cadillac Three prove they are Nashville’s most versatile band. The trio of singer-guitarist Jaren Johnston, drummer Neil Mason and lap-steel player Kelby Ray have been performing together for over a decade and adding to their loyal following. On their fourth album, Country Fuzz, the musical co-conspirators further their country-rock sound while also exploring heavy funk on some tracks.

Funnelling Southern-to-the-core sensibilities into their catalogue and known for their unpredictable live shows, TC3 was named Best New Band at the 2014 UK Classic Rock Roll of Honour Awards and received a 2019 CMA International Award nomination for International Artist Achievement. “Like Kings of Leon before them, they’re poised for their first big break in the UK – where they’ve sold out every headlining show for nearly two years – before conquering their US home turf,” heralded Rolling Stone.

We’re offering Country Fuzz at special pre-sale prices, which won’t be available after release. Click here for more details and to order your copy.