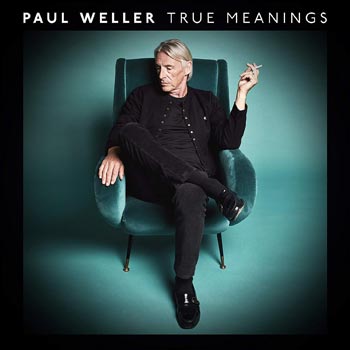 Put simply, True Meanings, the fourteenth solo album from Paul Weller and the twenty-sixth studio album of his career, is a record unlike any he has ever made before. This is an album characterised by grandiose yet lush, delicate orchestration: an aesthetic to which Paul’s voice, never sounding better and singing some of his most nakedly honest words, is perfectly suited. It’s a dreamy, peaceful, pastoral set of songs to get lost in, both an album that a lot of his faithful audience have been wanting him to make for a long time and an album that many new people outside that audience will relate to.

On 25 May this year, Paul Weller turned 60: a milestone that has unquestionably had an impact on the feel, both lyrically and musically, of True Meanings. This comes across in the most singer-songwriter-style album he has ever made. However, it is also the most collaborative, with more guests than any record he’s been involved in before: as well as all the members of Weller’s band, featured guests include Rod Argent of The Zombies, folk legends Martin Carthy and Danny Thompson, Little Barrie, Lucy Rose and Tom Doyle of the White Label project. Even Noel Gallagher makes a sneaky appearance!

Perhaps most surprisingly of all, especially given how personal and introspective True Meanings feels, lyrics for four of the fourteen songs here were written, to Weller’s melodies, by others. Connor O’Brien from Villagers came up with the words to opener ‘The Soul Searchers’, while ‘Bowie’, ‘Wishing Well’ and the closing ‘White Horses’ are all the work, lyrically, of Erland Cooper from Erland & The Carnival.

Note: The limited, deluxe edition CD is housed in a case-bound book package and includes a 28-page booklet of photos and lyrics.

We’re offering True Meanings at special pre-sale prices, which won’t be available after release. Click here for more details and to order your copy.