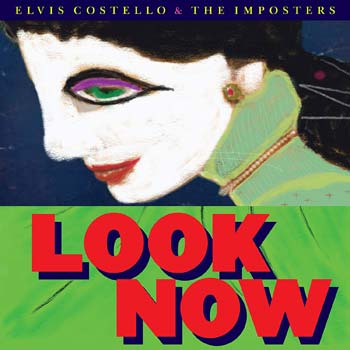 Elvis Costello And The Imposters have made a sensational new album that ranks alongside the best work this singular artist has ever produced.

Look Now is beautiful in its simplicity, reflective in its lyrical vision, surrounded by melodies and orchestrations that are nothing short of heavenly. It’s the first album Costello has made with The Imposters since 2008’s Momofuku and his first new album of any sort since 2013’s acclaimed Wise Up Ghost.

During the ‘Imperial Bedroom & Other Chambers’ tour of the USA last summer, Costello realised that the power and sheer musicality of The Imposters had never really been fully captured on one record. It was time for them to return to the studio.

“I knew if we could make an album with the scope of Imperial Bedroom and some of the beauty and emotion of Painted From Memory, we would really have something,” said Costello. Look Now is an outstanding addition to his song catalogue.

We’re offering Look Now at special pre-sale prices, which won’t be available after release. Click here for more details and to order your copy.