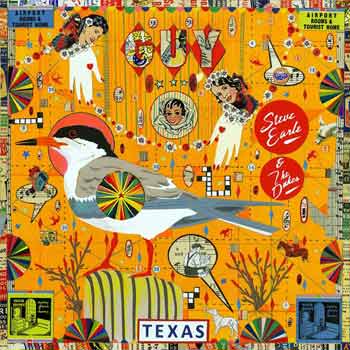 In 1974, the nineteen-year-old Steve Earle had just hitch-hiked from San Antonio to Nashville. Steve started playing bass guitar in Guy Clark’s band and was soon flying high on what would become an indelible friendship of like-minded musicians who bonded in a kinship of stories told through song.

Flash forward more than forty years to May 2016, when Guy succumbed to lymphoma after a long battle. He had lived with the disease and continued to write songs until the day he died. He also painted, built instruments and owned a guitar shop in the Bay area. According to Earle, “You hung around with Guy and knew why they call what artists do disciplines. Because he was disciplined.” The same can be said of Earle. In the autumn of 2018, Steve and The Dukes went into House Of Blues studio in Nashville and recorded their tribute, Guy.

Note: The LP is available on indies-only blue vinyl.

We’re offering Guy at special pre-sale prices, which won’t be available after release. Click here for more details and to order your copy.