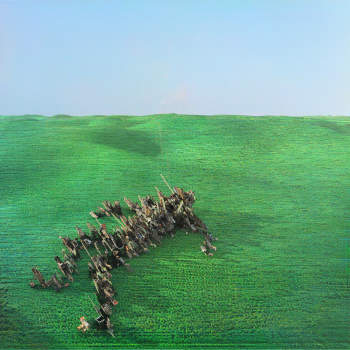 Squid are thrilled to announce their debut album, Bright Green Field, already one of 2021’s most highly anticipated albums. It’s an album of towering scope and ambition, it is deeply considered, paced and intricately constructed. With all band members playing such a vital and equal role, this album is very much the product of five heads operating as one.

Some bands might be tempted to include previous singles on their debut – and the band had already released ‘Sludge’ and ‘Broadcaster’ in 2020 – but instead Bright Green Field is completely new. This sense of limitlessness and perpetual forward motion is one of the the key ingredients that makes Squid so loved by fans and critics alike.

Note: The LP is available on indie-shops exclusive green vinyl.

We’re offering Bright Green Field at special pre-sale prices, which won’t be available after release. Click here for more details and to order your copy.