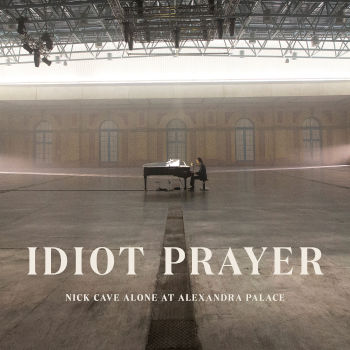 Idiot Prayer is a solo piano recital by Nick Cave, recorded at the iconic London venue Alexandra Palace in June. In it, he plays songs from his extensive back catalogue, including rare tracks that most fans will be hearing for the first time. The songs are taken from across the breadth of Cave’s career, including early Bad Seeds and Grinderman, right through to the most recent Bad Seeds album, Ghosteen.

“Cave’s solo live stream could be the most the beautiful and sombre performance he’s ever given.” (The Telegraph)

“Cave’s performance in an empty hall, with just piano and voice, seems to try and ward off the terrifying silence of the Covid-19 age.” (The Guardian)

“Gravitas echoes beautifully in the void of an empty Alexandra Palace.” (Evening Standard)

“The dramatic minimalism of this setting is perfect for an expressive face, and such powerfully emotional songs.” (The Arts Desk)

We’re offering Idiot Prayer: Live Alone At Alexandra Palace at special pre-sale prices, which won’t be available after release. Click here for more details and to order your copy.