Pre-sale of the week is Golden Hour by Kacey Musgraves, out on 30 March. 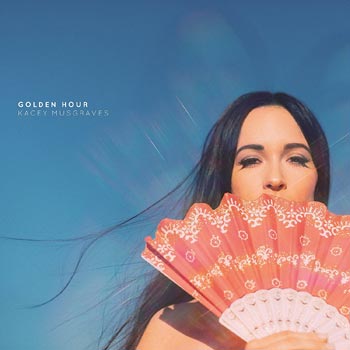 Golden Hour – the follow-up to 2015’s Grammy-nominated Pageant Material – represents a shift in perspective for Kacey Musgraves, and is perhaps the most mature work she’s yet undertaken. The title, like much of her new music, was inspired by her relationship with husband Ruston Kelly. Though the album still bears her trademark wit, it’s a turn in a softer direction emotionally.

Musgraves came up with the title while viewing the solar eclipse. “It felt like this majestic time where God was saying, ‘This is a moment to be present for, to witness and relish in the beauty of this incredible world,’” she says. “That was important for me to include on this record. It’s such an ugly time right now with society and politics, and it could be easy to focus on that. But one thing we could use is a little more love and positivity and pretty colors.”

She refers to the music as “trippy”, listing influences from Neil Young and Sade to the Bee Gees. Collaborators on this album include writers Luke Laird, Shane McAnally and Natalie Hemby, as well as her co-producers Ian Fitchuk and Daniel Tashian. The album was recorded in the studio above Sheryl Crow’s horse barn, and Crow sometimes hung out at the sessions.

We’re offering Golden Hour at special pre-sale prices, which won’t be available after release. Click here for more details and to order your copy.