Pre-sale of the week is World’s Strongest Man by Gaz Coombes, out on 4 May. 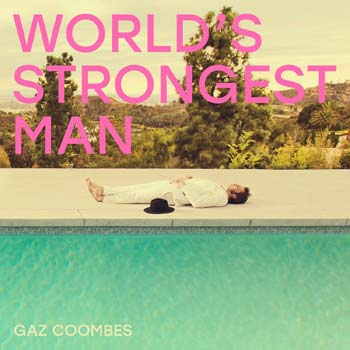 This remarkable collection of eleven deeply personal songs set to expansive, addictive melodies has been inspired by an eclectic mix of sources such as Grayson Perry’s autobiography The Descent of Man, Frank Ocean’s Blonde, Californian weed, British woodlands, unchecked masculinity, Neu!, hip-hop, and a whole lot more besides. From the deep soul purge of the title track to the coruscating Fripp-goes-motorik sprint of ‘Deep Pockets’ via the gorgeous cyclonic ballad ‘Slow Motion Life’ and the raw-as-hell stream of consciousness panic attack of ‘Vanishing Act’, World’s Strongest Man is a bold, ambitious, free-thinking, future-facing rock’n’roll record.

Following the release of Matador, Gaz evolved from ‘former Supergrass frontman’ to hugely respected Mercury Prize-nominated solo artist in the space of just ten months. That album spawned five singles, was described by Q magazine as “his masterpiece” and labelled an “instant classic” by Mojo. Like Matador, World’s Strongest Man was written, recorded and produced by Gaz Coombes at his home studio and at Oxford’s Courtyard Studios, with co-production from long time studio partner Ian Davenport in a working process Gaz compares to what it must be like to edit a novel.

We’re offering World’s Strongest Man at special pre-sale prices, which won’t be available after release. Click here for more details and to order your copy.